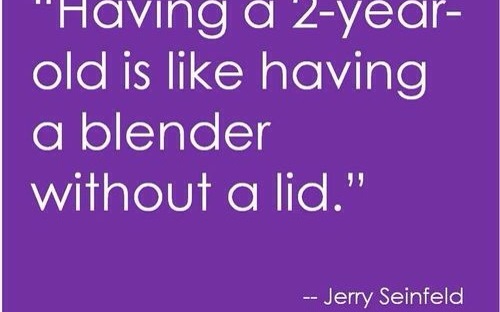 I’m a chronic over thinker and I like to know that I have thought of every possible scenario of a situation that may or may not happen so that I can be prepared for what may come. When Leo was really small I liked to think I was quite prepared for most things that would be coming. For instance him learning to roll, crawling, first steps etc and I would quite often prepare in advance. Doing things like buying floor mats in case he fell and putting up a fire guard, moving things that could harm him out of the way etc. Well over this last few months I have felt so unprepared for Leo growing up! It seems that back in the days of pregnancy and shortly after birth when I would find myself imagining what our lives might be like with a child, I clearly hadn’t imagined anything passed the age of about 18 months!

The terrible twos hit like a meteor! Of course I had heard of them before but I have to confess I was that smug mum that thought “not my kid, hes so easy going, goes with the flow, yada yada”. Although Leo had obviously had tantrums before, they weren’t really ever anything to write home about. Well imagine my surprise and the colour of my face when, whilst on the way to meet a friend and standing in the middle of the high street, Leo decided to Kick Off because I told him he couldn’t go in to Marks and Spencers. I was mortified. I hadn’t prepared for this, I hadn’t come up with an action plan for public meltdowns… Usually at home I would just leave him to it and he’d be over it in half a second. I could hardly walk away from him in the middle of town… could I? I wondered if I should wrestle him off the ground and back in to his pram or try and bribe him with snacks. The onslaught of both sympathetic and judgmental stares was overwhelming. Luckily at that point my friend arrived with her daughter and distracted him although I wasn’t sure if I was more embarrassed that my friend had also seen me nearly losing my marbles. I’m still no good at dealing with public tantrums.

Another thing I wasn’t prepared for was the day that my hubby was coming to pick me up from work and when I phoned him to find out where he was, I heard a little Leo voice. Hubby then filled me in on the fact that Leo had learnt how to climb out of his cot that evening and so he didn’t feel relaxed enough leaving him with our friend to run up and down the stairs after him, especially if Leo could have hurt himself. It wouldn’t have been fair on them. That was Leo’s last night in his cot and I hardly slept a wink for fear he would fall whilst climbing out and break something. I don’t know why but I had just always assumed we would transfer Leo in to a toddler bed when We were ready. I know some kids climb out their cots all the time but Leo had never shown an interest before this night then all of a sudden he was out! I felt sure we had more time. The next day I converted his cot to a toddler bed. The transition from cot to bed was something else. I pretty much had to re-organise his whole room. We also had to take the handles off of his changing table because Leo decided to use them as a ladder to climb up and just sit on the top.

Also nap times. I always thought kids either had nap time or they didn’t. Not Leo. Leo has a nap on some days because otherwise he won’t make it passed tea time awake and if we put him to bed then for the night we would have the situation of him being wide awake and ready for the day at 3am. Then other days he doesn’t want to nap and stays awake all day. Although at the moment he has decided he likes to wake up in the middle of the night for a few laps of his bedroom anyway no matter whether he naps or not.

One of the biggest things I hadn’t prepared for was Lockdown with a toddler. A very active toddler. A toddler who likes to do nothing more that “Go Fast” and run up and down all day. It’s been tough to keep him entertained if he has to be in the house. We do allow him to watch the TV but to be honest after a while he will want to be running about again.

I think the moral of this story is that you can think about things and plan as much as you like but when it comes to babies, toddler or children in general you will never be as prepared as you like to think you are.