I realise that in my last post I never said anything about the results from the ultrasound I had… I’ll get to that in a bit.

Following on from my previous post, I had just discovered I was pregnant. I was genuinely in shock and stood staring at the test for a good ten minutes just in case my eyes deceived me. Then I phoned my mum. I was going to phone hubby first but he was still out at our friends and I didn’t want his reaction or anything he said to give away our news just yet. So anyway I phoned my mum and spoke to her instead.

Very suddenly things got very real and as well as feeling very excited, I also started to panic a little. The idea of getting pregnant had always been fantastic. The reality was suddenly absolutely terrifying! There was so much to think of and now suddenly so many things I couldn’t/shouldn’t do in order to protect the precious little life I was now growing.

On the same day that I was supposed to take my urine sample in to the doctors (just to be certain I was definitely pregnant), I discovered a rash on my hip which my mum said looked like shingles. Cue first panic. An appointment was made straight away at the doctors and when it came, the doctor came out and looked at me slightly confused. Once in the room he informed me that he was puzzled because literally that morning he had been reading a letter sent to him by the specialist wanting to see me about the results of my ultrasound. It had been discovered that I have a hydrosalphnx (fluid filled swelling) of my left fallopian tube which could potentially be blocking it and therefore causing me issues getting pregnant. Yet here I was, nearly 6 weeks pregnant, and indeed with the shingles. I was told not to worry as it’s not quite the same as the chicken pox and is in the nerves as opposed to a virus, like the chicken pox. I could have taken some medication to help with any negative symptoms but the doctor also said that if I wasn’t suffering badly then I could try to cope without as he wasnt 100% sure what impact the medication would have this early in a pregnancy. Luckily it wasn’t a bad case and apart from a bit of an irritated hip and leg I didn’t really notice.

I had to go for an early scan at 6 weeks just to check that I wasn’t experiencing an ectopic pregnancy due to an increased risk because of the tube swelling. On the day, my mum took me as hubby was working. I was so nervous that whilst in the waiting room I burst in to tears and couldn’t seem to stop them. The lady doing the ultrasound was so lovely though and luckily baby was were they should have been. She even pointed out the flicker of the heartbeat. I was glad she could see it as it put my mind at ease but I had absolutely no idea what on earth she was pointing at… Also because I was so anxious, the doctor offered me another ultrasound at 8 weeks. At this one she said that although the swelling in my tube seemed to have reduced, and baby appeared to be growing perfectly, we would have to keep an eye on it and see what it was like after baby was born to see if I would need the tube removed. Funnily enough the thought of this didn’t actually terrify me. Had it have been mentioned before I got pregnant then I would have been more upset but I also know women who have gotten pregnant with only one tube. I was assured that I didn’t have to think about it for now though.

At 13 weeks pregnant I had an unexplained bleed. I woke up and went to the toilet as always and was still half asleep that I barely even registered the bright red blood on the tissue. Then suddenly my brain switched on and panic ensued once again. I ran back into the bedroom with the tissue still in my hand and told my husband I was bleeding. it clearly took him a minute to register as well, but I could tell once it did as I have never seen him get out of bed so quick in my life. I phoned the assessment unit and they told me to come right in. I phoned my mum on the way and she met us up at the hospital. The midwife that checked on me was absolutely lovely and made me feel so much more at ease. She arranged for me to have another ultrasound just to check baby was okay and on this occasion the ultrasound tech was horrible. I’m not sure whether I was just being overly sensitive or what had gotten to her that day but first of all she shouted at me because my bladder was empty… Yes, because when at home I had been to the loo, realised I was bleeding, came straight to the hospital where they wanted me to pee again to check for protein and whatever else they check for. Sorry if I didn’t have time to stop and down a litre of water in the process. Also she seemed like I was wasting her time or would have rather been anywhere else but in that room. Now I appreciate that people have bad days but when a woman is in your ultrasound room bawling at the worry of possibly losing her baby because she knows no better, surely the least you can do is offer a reassuring smile. Anyway, turned out baby was fine and the bleed was nowhere near them, the midwife said it was just one of those things that can happen and to keep an eye on it and phone back straight away if we needed anything.

Other than the above my pregnancy was fairly un eventful physically. I was very lucky that I didn’t really have any food aversions and I was very rarely ever sick although would get nauseous quite a bit. However, mentally it was exhausting. not just for me but for anyone who had to listen to me. mainly hubby and my mum. Poor people. I was worried about everything. I even worried so much sometimes that I would have full on panic attacks. I couldn’t shake the feeling something bad was going to happen.

I was incredibly anxious at my 20 week scan as well as I assume most parents are. Hubby was with me as he had been for all my other appointments (apart from 6 week scan). As usual baby was being rather uncooperative and wriggling around so much that the tech was having an interesting time trying to get a good angle to check all the things she needed to. Eventually she managed though and she said that, although they can never be 100% sure, everything seemed perfectly fine and healthy with baby. She also discovered that, again they can’t be 100% sure, but she strongly believed we were having a little boy!

If im honest, I really wasn’t the biggest fan of being pregnant. I always imagined I would be one of those women who embraced pregnancy full force and looked glorious and glowing and maybe it would be the one time in recent years that I actually fell in love with my body again. Nope, I really didn’t like it. I hurt, everything ached, I couldn’t get comfortable whether I was sitting or standing or trying to sleep. I felt HUGE and people weren’t shy about telling me how big I was either. I did love it more once I started to feel the baby move more and also really enjoyed going for our ultrasounds and baby check ups but that was literally the only part I enjoyed I think.

Towards the end of my pregnancy I noticed that I was starting to feel baby less and less. Family and friends tried to reassure me that this can be normal as they run out of room towards the end. This advice however went against all the things I had read and what the midwives had told me. Apparently babys movements may be different but shouldn’t be less. At about 37 weeks I ended up freaking myself out one day as I really hadn’t felt baby for a couple of hours. I woke husband (who was sleeping after a night-shift) and we went up to the assessment unit. The lovely midwife that I met at 13 weeks was there again and she checked me over and once again made me feel so much more at ease. I got hooked up to the CTG machine and could see that baby was moving and I just wasn’t feeling it. I knew that I had an anterior placenta (a placenta that is at the front down my belly as opposed to the back) but I hadn’t thought anything of it really as up until this point I had been feeling baby plenty and always thought if it was going to affect my ability to feel any movements then it would be early on when they were softer.

The doctor came in and spoke to me and over the next week it was decided I would have to go for regular scans as at a couple of points during the CTG it was noticed that baby had gone quite quiet as well as me not feeling the movements he was making. 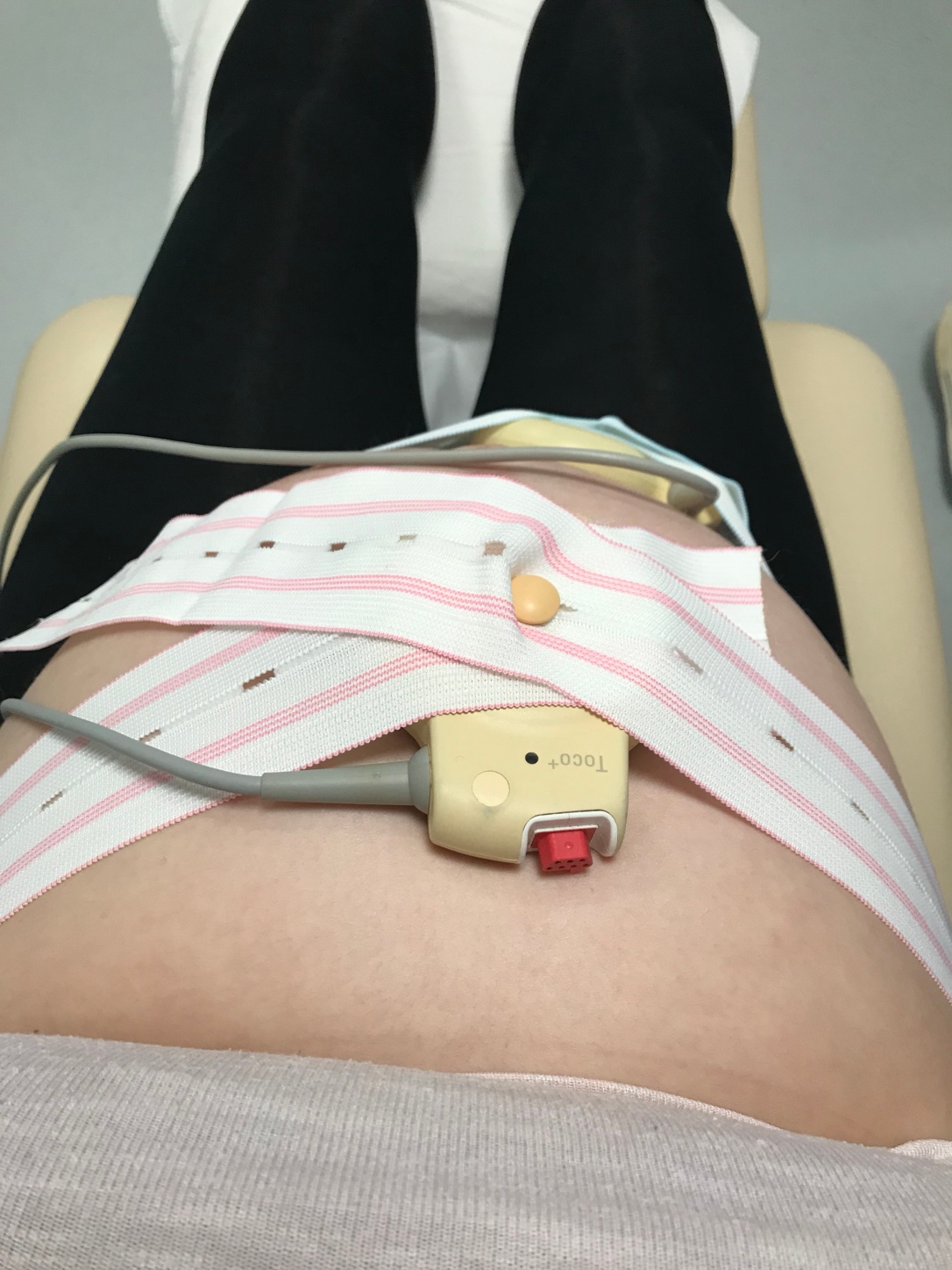 At 38 weeks doctors agreed that it would be safer for me to be induced into labour at 39 weeks. That way we could definitely make sure he was healthy and moving about as he should be, rather than the constant worry of something going wrong in the mean time. So at 38+6 weeks gestation I went in to hospital to have our baby.

28+1
27+4 weeks with our second baby boy.
Leo had a bit of a rough night after his 3 year booster jags. He got a little bit of a temperature and was quite unsettled but he woke up this morning and seemed very much like himself so after a precautionary dose of calpol we decided to go with the day we had planned and take him on his first proper trip to the beach!
I have definitely posted this photo just about everywhere but I hardly ever get a photo of myself that I really like so when I do it gets shared all over the place😂
Today me and Leo went to visit his nanna (my mum) at her new house. It’s weird not just having her, her partner and my brothers literally round the corner now (as in their garden literally backed on to ours). I can’t just nip round for a bit and walk home when I please. It’ll take some getting used to but her new home is lovely and Leo was delighted with the new park. He kept asking to go back 😂
Happy Father’s Day to my boys Daddy. Also Happy Father’s Day to our own dads (not that any of them will see this 😂) and all the other dads out there wether you’re a step dad, an adoptive dad a foster dad, a dad of angels, a single dad, gay dads, a person who longs to be a dad. I’m sure I’ve missed some but if you’re a dad in any way have a lovely day 💗
Loading Comments...
%d bloggers like this: